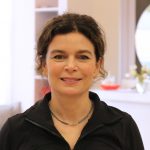 Cathy graduated from the University of Southern California with a B.S. in Education and earned an M.S. in Guidance and Counseling from Hunter College. In 1999, several months after having her youngest child, Cathy first began practicing Pilates at the Center for Movement. As a skier, after many years on the slopes, she went back to skiing after Pilates and noticed a total transformation in her core strength and vastly improved skiing ability. Having transformed her post pregnancy body and at the same time built up an incredible new strength, she became devoted to weekly Pilates sessions. After18 years practicing Pilates, and with her children grown, she returned to Center for Movement as an apprentice in their Teacher Training program and will soon be certified in the classically trained Pilates method. She enjoys helping people feel longer, stronger, leaner and feeling good in their own skin!